Today we have a snippet from The Good Green Earth, Colors of Love #3.

Our word prompt today is “Blade”. This snippet is from about a third into the book when Nate sneaks into a local rink to watch kids playing summer league hockey. 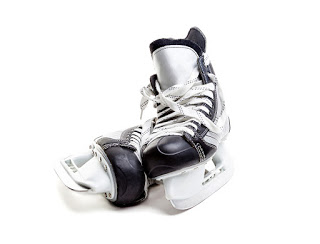 Pulling my cap down to my eyebrows I took a seat behind the home goalie, a tall kid who liked to move a lot in his crease. Goaltending coach needed to settle that boy on his skates. The practice was a good one, lots of quality info being passed along to the summer league boys and girls. The Ponies. Yes, that was the name of our sponsored youth team. The Syracuse Ponies. Fucking righteous moniker if you asked me. I sat there for maybe twenty minutes, enjoying the shit out of the cold air in my lungs and the rasp of skate blades on ice. Man, I wish I were playing now. I so needed the love that only hockey and Jacob had ever given me.

Then out of nowhere, a face appeared on the other side of the glass. The goalie, still in his mask and gear, rapping on the tall wall of Plexiglas trying to get my attention. I smiled at the kid then tapped the brim of my black hat with two fingers. He grinned, turned, and began shouting to his coach and teammates. I slithered down in my seat a bit, but it did no good. I’d been outed. Within ten minutes I was out on the ice in my sneakers, my calves freezing, talking to the Ponies about concentration, discipline, and focus. Their coach, an older guy with big ears and a bigger smile by the name of Will Dickenson, nodded throughout my impromptu speech.

I shook hands and signed a few sticks before I was pulled to the bench by the coach while the kids skated off to change. He waved at the home bench. I dropped down to it, ignoring the unhappy looks from the mothers behind us. Probably they didn’t want a felon like me being around their kids. That was justifiable to some extent.

“Nate, I’d like to thank you for taking the time to talk to the kids. They’re all huge fans of yours,” Will said, his hand pumping mine steadily.

“Totally my pleasure,” I replied as he sat down, my fingers still in his.

“Look, I know this is pushy…” He released my hand before plowing ahead with whatever it was he wanted to ask. “Rumor has it you’re spending the summer in town.” I wasn’t sure how to reply but Will slid in before I could formulate an answer that didn’t make me sound like a drunken loser. “I’m not going to touch on why you’re here. You made a mistake. You’re working to fix things. That’s what a man does, he owns up to his faults and works on improving them.”

I caught the quick sort of shady look he tossed to the women behind us. “Thanks. Not everyone sees it that way.” Me included but now was not the time to get into all that.

“We have no control over others. So, the thing of it is, I was wondering if you’d be willing to stop by here and there during our games and maybe just give us your thoughts on our performances. Maybe talk to them about hockey, your experiences, stuff like that. I know you’re busy, so it could only be a monthly thing…”