Today we have an excerpt from Sugar and Ice, Arizona Raptors #4, written with RJ Scott. 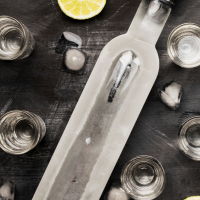 Sensible: a course of action chosen with prudence.

That was how the dictionary explained the one word that I’d always tried to base my actions on. I was not one to be rash or rush into things. That was more my brother Dimi. I was the cool one, the levelheaded twin, the man who approached a problem systematically and with control. If you lost restraint you did foolish things. Things that could harm you in ways you never imagined when you were being a moron. My brother Dimi and the farm pond incident when we were twelve sprang to mind.

He had insisted that the ice on the small farm pond we played pick-up games on was thick enough after one or two cold nights. Papa had warned us off the pond just the day before. So, being bullheaded, Dimi skated out, turned to look at me and gave me the shish, an old Russian hand gesture with the thumb between the middle and index finger. It’s childish gesture that we always used when we were arguing. No sooner did he finish lifting his hand did the ice break under him. He’d lost his new skates and had to slop home soaking wet with chattering teeth and explain to Papa where his skates were. Not a sensible lad my brother.

Now, it seemed, I was beginning to act like my reckless twin. Even as I made the call I knew I was being careless, but the drive to see him was too strong to be ignored.

Tate picked up on the fifth ring.

“Hey there,” he said, my ear instantly pleased with the sound of Texas caressing it.

“Hello. Come to my room. Bring your digital playbook.”

“Come to my room. Bring a digital playbook. Be here within ten minutes.”

I ended the call, leaned back in the short-backed gray chair by the standard hotel room desk, and picked up my drink. Three fingers of Stoli with a twist of orange over two cubes. Hotel mini bars were great. The heater clicked on, stirring up the dry air. I sipped my vodka.

Would he come? Would he not?