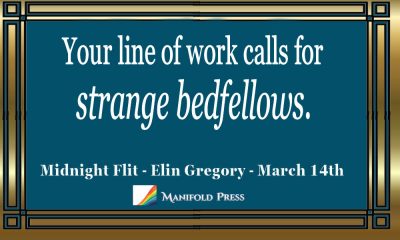 Miles Siward is in Bucharest to accompany his mother home to London and they are taking their leave before the journey.

Miles offered his hand to his father and was a little surprised to be pulled into a brief embrace. “Don’t worry, Pa.”

His father gave his shoulder a thump. “As long as you’re with your mother, I’m sure everything will be fine. Now I must go.”

Miles turned away, pretending to check that his and his mother’s luggage had been placed sensibly close to the doors, but actually to give his parents a moment of privacy. Miles smiled as he heard his father sigh, the sound of a kiss and a giggle from Ma. They were both approaching sixty at breakneck speed; Miles hoped that he would be as capable of wholehearted affection as they were when he was the same age – but he supposed that rather depended on having someone to be affectionate with.

For a few moments he allowed himself to dream of a time when he had retired from his position in Whitehall and Briers was done with spying. Maybe they would manage the estate for George and his family? Or have a place of their own? It wasn’t unheard of for two aging bachelors to pool resources and share a house for both company and economy. Miles would paint and work in the garden. Briers would… Actually, Miles’ imagination failed him there. He couldn’t imagine Briers developing a passion for hollyhocks or beekeeping, but he must have interests beyond national security. That would be a subject they could discuss next time they met—once they’d got their breath back.

“Very well, I must be off.” Father’s gruff voice startled Miles out of his day dream. “These trade deals won’t negotiate themselves, and now that Prince Carol is back it’s a kid glove job. Will you walk me to the door, Miles?”

“With pleasure, Pa.” Miles fell in behind his father as they left the ambassadorial quarters and stepped out into one of the public areas. Smethwick was immediately at his father’s elbow, casting a nod of greeting at Miles as he did so.

“Sir, I’ve arranged for madam to have the larger car with Royston to drive.” Smethwick pulled on a pair of gloves. “I’ll drive you myself.”

“Thank you, Smethwick. Miles, Royston knows the route well and has had full training. He’s a good man. Miss Carey is rather more than a secretary, as you might have guessed, so between the three of you I’m sure your dear mother is in the safest hands possible.”

“Thanks Pa,” Miles said. “And thank you for helping me to persuade Mother to come back to London. It might be nothing—”

“But it doesn’t do to take chances, I know. Damn Von Stroebel. Why couldn’t he have kept his mouth shut?”

“What man can when Ma exerts all her charm to put him at ease?”

“That’s true.” Pa chuckled. “Give Naylor my regards. You may not be aware of it, but he very much appreciates the effort you have put in over the past few years. There aren’t many with your particular set of skills, and I’m told you’ve been a great asset to the Service.”

Miles felt the heat rise in his cheeks, partly from pleasure because Naylor was very close-lipped and it was good to hear that he had been pleased, and partly from worry about how much Naylor had told his father. Then he told himself to buck up. “That’s very good to hear, sir.”

“It was good to hear but,” Pa put his hand on Miles’s shoulder, his clasp warm and heavy, “I was already proud of you. I just wanted you to know that.” 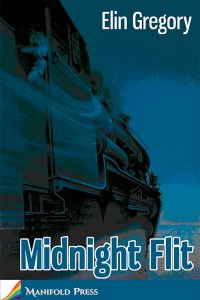 Miles’s aristocratic mother has information of importance to the British Government and he must escort her home from Bucharest immediately, but their plans go violently awry and Miles and Lady Siward find themselves on a train to Belgrade – where Miles’s lover is posted. Since their pursuers are looking for a man and a woman, might two women slip past them unnoticed?

“Is anyone on this train who they say they are?”

Briers doesn’t know whether to kiss Miles or punch him but is delighted to accompany him and his mother on their journey. All he has to do is keep an eye open for their enemies – but who exactly are they; the enormous Russian, the sinister priest, the handsome jazz pianist, or maybe the winsome young movie star? And his mother-in-law might just be the most terrifying of all!

All aboard for the ride of a lifetime, with a cast of characters you’ll never forget!

Elin Gregory lives in South Wales and works in a museum in a castle built on the edge of a Roman Fort! She reckons that’s a pretty cool job.

Elin usually writes on historical subjects, and enjoys weaving the weird and wonderful facts she comes across in her research into her plots. She likes her heroes hard as nails but capable of tenderness when circumstances allow. Often they are in danger, frequently they have to make hard choices, but happy endings are always assured.

For your chance to win an eBook of Elin’s Eleventh House – The Carstairs Affairs #1 enter the Rafflecopter below.