On our Friday Feature Author this week we have my lovely and always bubbly coauthor RJ Scott. She’s got a fab new release for your reading enjoyment to chat about as well as a few other topics such as favorite hockey teams, outer space adventures, and what’s next on her busy schedule.

Q1- Tell us a little about your Montana series and what inspired it.

A long time ago I wrote this little series based in Texas. I loved writing texas, I love cowboys, and ranchers, and I love Montana – it was a no-brainer. Add in the whole city slicker/cowboy opposites attract hook and book 1 flew by. Only I created two missing kids. And then they needed their books and then… yeah, it just grew. BUT, now everyone has their happiness, and this is the final Montana book

Q2- If you could set a book in any locale on the planet – or even off it – which locale would you choose?

I’d love to write a sci-fi one day about this star ship that explores new planets and meets new people. Of course all the people on the ship would be confident, dare I say, bold? JK. I have stories in my head set in Wales, but they are historical stories, and I don’t tend to write those. Maybe one day.

Q3- Do you sometimes wish you cheered for the New York Rangers? Asking for a friend.

LOL & Nope. And would this friend happen to be a fan of NYR? LOL… Pens fan I will stay…

Q4- What’s up next on your writing schedule?

I’m in the middle of writing a new standalone story called Single – about a single dad and his new baby daughter who lives next door to a house with three very different first responders and ends up falling for the medic… It’s so much fun. Also up next is a NEW hockey series book 1 with that irritating co-author of mine Licky Vocey, or something like that. The two of us are SO excited and we have a million story ideas already LOL

Q5-How long do most of your series run? What’s the longest you’ve written?

Texas is 8 books. Nearly half a million words in all – but that series is finished now (I’ve said that twice now LOL – but for real the last book was at Christmas). Sanctuary is ten books, that is all bodyguards and action and love… I seem to like my series. Then of course Railer Hockey is 6 novels and three novellas, plus three spin off NA novels… :O

Q6-Where do you like to work? Office, coffee shop, in the park?

My office which has an awesome view of the floodplain park land in front of it. With a cuppa and a digestive biscuit (look it up!)

Q7- What’s your next release that we can look forward to?

Single is out end of May, obviously Montana 6 has just released. Then I have Benoit (Owatonna 3) in May, Save the Date (Railers 9) in June… July I think is Summer Drifter, sequel to Winter Cowboy, but we’ll see 🙂

Thank you so much for having me! 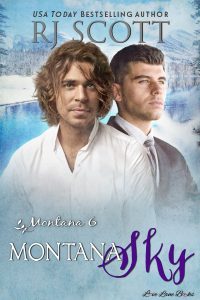 When they spend time alone on a Montana mountainside will Tyler ever convince Martin that like sapphires, love is worth searching for?

Martin’s name was the very last on a kill list. The son of a murderer, he’s had no childhood; lost in a horrific holding pattern of death that turned his heart to stone. Thanks to the man who called him brave and spared his life, he no longer has to look over his shoulder, but he does have one question. Why did Justin let him live?

Tyler Colby has identified a major flaw in the seismic mapping system used to monitor earthquake activity. Sent to Crooked Tree by his employer, the Montana Bureau of Mines and Geology, he is tasked with adding a new remote station to the network. The installation should be his entire focus, but the lure of sapphires and his attraction to a heartbroken young man called Martin is enough to make him want more.