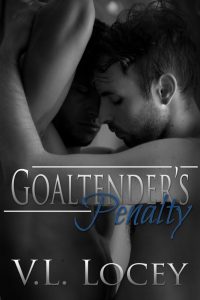 It was supposed to be a fun-filled night at the arena, cheering on the Harrison Hawks, ogling the blond Acadian god/goalie in the crease, and maybe, if he was really lucky, catching an airborne puck with his hands and not his face.

Unfortunately for Daryl Hamilton, his first minor league ice hockey game ends with him catching something with his face, but it’s not a puck. It’s the fist of his dream goalie, Ryan Amirault. But while his nose may not be thankful for the badly timed autograph request, Daryl can’t say that the rest of him isn’t pleased with how things are turning out.

Not only is Ryan turning himself inside out to make things right with Daryl, the spark of attraction between the two men is slowly blazing up into a roaring inferno. The only problem – aside from two black eyes – is that Ryan isn’t out, there’s a viral video of the nose-crunching encounter, and a rather curious sports reporter is snooping around the daycare center where Daryl works. If their new love can survive all that, it will survive anything.