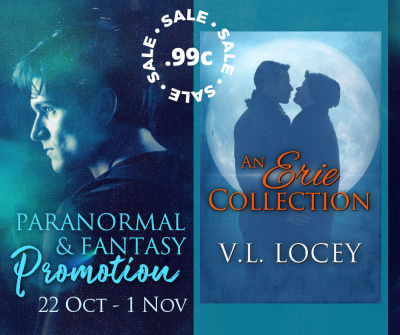 It’s that time of the year again! When we huddle under the covers and read about things that go bump in the night. *wink-nudge*

If you’re a fan of MM paranormal and fantasy reads then this is a promo you won’t want to miss! 35 authors have joined together to bring you an amazing assortment of books.

I’ve lowered the price on The Erie Collection to only $0.99 just for this event. You’ll get four complete novellas set in a world filled with shifters, vampires, and other fey creatures for only ninety-nine pennies! But you’ll have to act fast for once the promo is over the price magically goes back up.