Rj Scott and I are kicking off a brand new series this June and we’re celebrating with a great giveaway as well as a cover reveal! Stick taps to Meredith Russell for this ah-may-zing cover art. *fans self*
Add to your Goodreads shelf: http://vllocey.com/ReadTopShelf 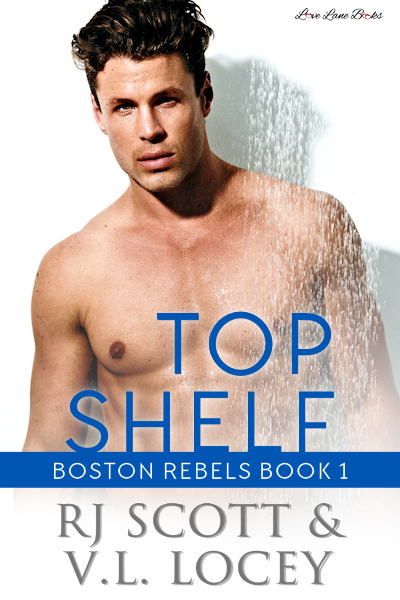 (Unedited Blurb)
Acting on the attraction to his best friend’s brother has always been off the table for Xander until a passionate hookup with Mason at a beach resort begins a love affair that burns long after summer ends.
Mason specializes in assisting same-sex couples on their journey to becoming parents and fighting every rule that blocks his way in the stuck-in-the-past agency that hired him. Living in his brother’s pool house is rent-free, and every cent he earns he saves for his dream—that one day he’d have his own company helping others. The downside is that he has to see his annoying brother every day, the upside is that his brother’s teammates from the Boston Rebels make regular visits. The eye candy that passes Mason’s window is almost enough to make him consider dating a hockey player, but not just any player though. Ever since Xander—his brother’s childhood friend—came out as gay at a press conference, Mason’s puppy love has turned into a burning attraction he can no longer ignore.
Hockey has been one of Xander’s main focuses since he was old enough to balance on skates. Well, hockey and Mason Kingsley, but Mason was always unattainable. Now that he’s about to see thirty candles on his birthday cake and is no longer hiding the fact he’s gay, he’s ready to find a soul mate to make his life complete. A summer vacation is just what he needs to have time to think, but when the Boston Rebels arrive in paradise with Mason in tow, thinking is the last thing he needs. One torrid night under a balmy moon and rules about not messing with his best friend’s brother vanish on a warm, tropical breeze.
Summer romances don’t generally last past Labor Day, but with the new season about to begin Xander and Mason are going to have to face the world and decide if their love is real enough to withstand everything.
http://vllocey.com/ReadTopShelf
CONTEST
Make sure to enter for your chance to win one of three $10 Amazon gift cards here:
https://kingsumo.com/g/q3nqsv/top-shelf-cover-reveal-party