Our word prompt today is “Mirror”, and we get a nice peek at the meeting of our leading men, Benoit and Ethan. 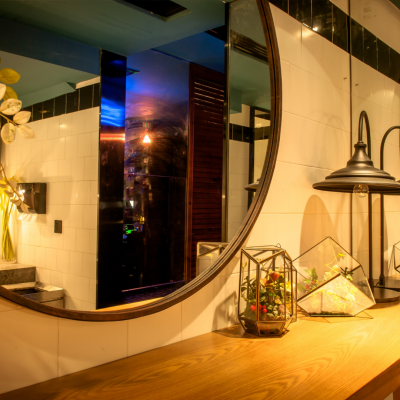 “Hey, Sir! Sir let me help you out here,” I shouted, running up to him to place my hand on his arm. “Someday they’ll have some handicap accessible doors installed here.”

I smiled at him as he turned to look at whoever was grabbing his arm. Our gazes touched and I felt this spark ignite in my lower belly. He was incredibly hot, with blue eyes the same color as the lake back home that I swam in and skated on throughout my childhood. Beautiful azure eyes under well-formed eyebrows, one with a thin scar, thick dark lashes, and lips that seemed to curl up at the edges with ease. Older than me, that was obvious by the small lines around his eyes, laugh lines. Must be he smiled a lot. That was good. I liked men who smiled frequently. I even dug his beard, to a point. If it had been trimmed down close instead of wild and wooly he’d be all kinds of sinful. Guy seriously needed some trim time in front of a mirror. His eyes held my attention. They were familiar for some reason…

“Sir, huh?” he asked, his voice deep and dark, like the inside of a whiskey barrel. “That doesn’t make me feel old or feeble or anything.”

I bent down to grab his crutch, my eyes skating over him. Tall, lean, hard, thick thighs and meaty calves, or I guess I should say thigh and calf. One leg was all casted up, the plaster covered with signatures and lewd drawings that someone – him probably – had tried to scribble out. Snickering at his attempt to make a dick look like a moose, I stood and handed him his crutch. He was no taller than me, and not any stockier, but his shoulders and arms were thicker.

“I’d say the crutch is what made you look feeble,” I said as he tucked his support under his armpit. That got me a wry look which really worked well on him. The man was fine, no doubt. “I’m kidding, really. They’re trying to find the funding to make the rink more accessible, but money for hockey barns isn’t as easy to raise as it is for the football stadium.”

“In Minnesota? The only people who love hockey more than Minnesotan’s are Canadian’s.”