“I CREATE LIFE!! … and I destroy it.” —Balem Abrasax, Jupiter Ascending

If you’ve seen Jupiter Ascending, you probably remember Eddie Redmayne shrieking that line, dolled out in his finest space-capitalist regalia. First off—every writer has stood alone in their bedroom in a glittering black sequin cape, thrown out their arms, and shouted the same while torturing your favorites. Every. Single. One of us.

And now that we’ve gotten that confession out of the way, we want to talk to you about writing immortality.

In Jupiter Ascending, the Wachowskis tasked Eddie Redmayne with personifying a 50,000 year old space capitalist with the power populate and harvest worlds—not unlike some gods we know. Their interpretation is obviously extreme, but asks the question: What if the best and worst aspects of someone’s personality were allowed to ferment for thousands of years?

It’s a question we attempt to tackle in our series, Lords of the Underworld. When we sat down to plan Prince of Death, we considered how the Greek pantheon had spent the years since they’d fallen out of power in human consciousness. We wanted to know which of them had slipped into the mundanity of being immortal in an uncaring world, which had adjusted to modernity and found a way to thrive in it, and which raged against the dying of the light. (Okay, the dying of their light. We, personally, like cell phones.)

But how do you get inside the head of someone ageless and immortal in a way you’ll never be, barring the aforementioned rant in a sequined cloak? There’s a little psychology, of course. And there’s a whole lot of guesswork, since unless you guys have some secret we don’t, none of us mere mortals will ever experience the concept firsthand.

We wanted to preserve some measure of the capriciousness of gods. In the original myths, they did what they wanted and took whatever struck their fancy. For many mortals, the best-case scenario involving gods was to remain ignored by them. It was the mortals who boasted, the ones who were too pretty or too powerful, who suffered when gods’ attentions fell on them.

In many Greek myths, the gods could be just as foolish and prone to failure as mortals, but the consequences of their anger and vengeance caused wars, destroyed continents, flooded the entire world. Eddie Redmayne has his shrieking accountant, and we have a pantheon of gods who are as careless, volatile, and whimsical as we imagine such powerful beings might be when no one’s looking. Try as we might, no one, not even Academy Award winner Eddie Redmayne, knows what it’s like to be a god, but there are lots of fun interpretations out there, and we hope you enjoy ours. 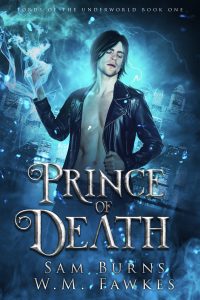 Gifted power over life and death, Lysandros has spent millennia in the underworld, listless and alone. The youngest child of Hades and Persephone, he’s been sheltered from the threats in the world above.

Theo Ward hasn’t been so lucky. After watching his mother wither away, he’d do almost anything to have her back. When a messenger appears at the Banneker College of Magic and offers the young professor a chance to save her, Theo can’t pass it up, even if it means going straight into the underworld and dragging her home. But Theo gets more than he bargained for when he crosses paths with the prince of Hades.

Set against the king of Olympus, they must shed their past burdens and learn to trust in each other, so they can face down a storm that threatens to wipe the nation’s capital off the map.

Sam Burns wrote her first fantasy epic with her best friend when she was ten. Like almost any epic fiction written by a ten year old, it was awful. She likes to think she’s improved since then, if only because she has better handwriting now.
If she’s not writing, she’s almost certainly either reading or lost down a Wikipedia rabbit hole while pretending to research for a novel.

W.M. Fawkes is an author of LGBTQ+ urban fantasy and paranormal romance. With coauthor Sam Burns, she writes feisty Greek gods, men, and monsters in the Lords of the Underworld series. She lives with her partner in a house owned by three halloween-hued felines that dabble regularly in shadow walking.