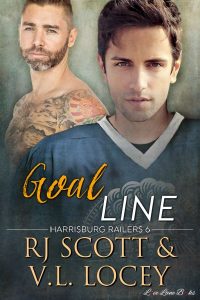 Fear and sadness mark Bryan’s life, can Gatlin show him that you have to trust before you can love?

Gatlin Pearce is creeping up on thirty-eight and is still single. It’s not that he wants to be alone, it’s just that he’s too damn old to be in clubs filled with glittery gay boys who can’t even tell him who the Rolling Stones are.
Better to just spend his evenings at Hard Score Ink – his tattoo and artwork shop – creating masterpieces on human flesh, listening to the Railers games, and nursing a cold beer.

His solitary life is about to end when Bryan Delaney, the new Railers backup goalie, shows up at his shop looking for new artwork for his helmet. There’s some sort of sad story in those beautiful eyes of Bryan’s, and Gatlin finds himself more than a little infatuated with the tender new goalie.

Bryan Delaney leaves home at fifteen to live with a billet family. He just wishes that he could have escaped his alcoholic father and strictly devout mother earlier. Drafted to the Arizona Raptors he finds a new family, and his first love affair even if that relationship is marked with violence.

Being traded to the Railers is a shock to the system but the team isn’t like any other he’s ever played on and they truly seem to care about him. It’s only when he meets artist Gatlin, with their shared love of music and hockey, that he realizes how much help he needs to escape the past.