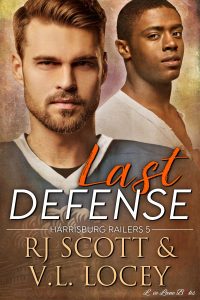 Two men afraid to feel, have to make choices that could end up breaking down their defenses and leading them back to love.

Every time Max Van Hellren steps on the ice he knows it could be his last time. At thirty he’s past his hockey prime but he’s also hiding a life-threatening injury that private doctors warn could kill him. This is his last season, and there’s a chance he could lift the Stanley Cup after fourteen years in the NHL. He just needs to stay safe and healthy; difficult when he’s known for his heavy hitting and with a propensity for dropping the gloves and putting his body in the way of pucks to keep his team safe.

A one night stand with a sexy man was just what he needed, dangerous and hot, but what if it turned into more? Would he actually have to share the secrets he so desperately tries to hide?

Ben Worthington had it all. A fulfilling job running the CrossRoads Shelter, his loving aunts, and a husband that understood his devotion to animals. Then, the love of his life left him, succumbing so quickly to an unexpected sickness that Ben never had time to say goodbye. The violent loss scarred him.

Unable to move past his fears, he moves from lonely encounter to lonely encounter, slaking a desperate need that is eating away at him, but never making a connection that could lead him back into love. One night with Max makes him want more, but will giving into the temptation open the door to feelings he can’t contain?

Can these two broken men ever find a way to be together?