Now Available in KU -The Ballad of Crow and Sparrow 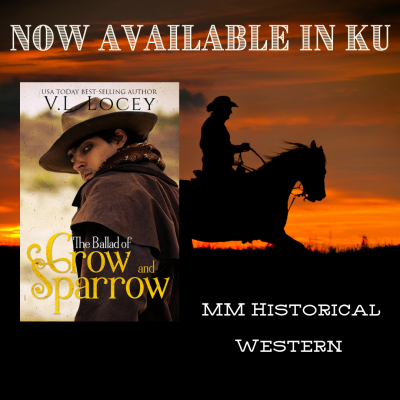 You can read this beloved MM historical western romance for free with your Kindle Unlimited subscription.
http://vllocey.com/read-crowandsparrow
Sometimes a man’s biggest blunder can turn into his greatest triumph.
Orphaned at fourteen, Crow Poulin now has to hunt and trap the White Mountains of Arizona, as his father had taught him, all alone. It’s a lonely existence, until one morning, while checking his trap line, Crow finds more than a rabbit in a snare. He stumbles across the outlaw Jack Wittington lying half dead in the wilds. He takes the wanted man in, heals him, and in return for saving his life, the smooth-talking criminal invites Crow to join his family. Starved for human interaction and a father figure, Crow leaves the mountains behind for what he assumes will be a brighter future.
Six years pass. Crow is now a man, as well as a member of the Wittington Gang. He may be considered an outlaw, but his father’s morals are warring loudly with the lifestyle of his adopted family. When the gang decides to rob a train, Crow has no choice but to go along to keep a tight rein on the more bloodthirsty members. It doesn’t take long for the scheme to go horribly astray.
Instead of gold-filled coffers, the gang finds Spencer Haughton, son of cattle baron and railroad tycoon Woodford Haughton, cowering in the family’s opulent private car. The outlaws grab the sickly heir in hopes of ransoming him off. Things then go from bad to worse for them when the law rides down on the Wittington hideout and Crow is given Spencer to hide until the ransom is paid. The pretty young man is nothing at all like anyone Crow has ever met before. Delicate, refined, well-educated, and possessed of a singing voice to rival the songs of the birds in the trees, Crow slowly finds himself falling for the winsome rich boy. But can two such opposite souls find the love they’re both seeking in each other’s arms?
« Tuesday Tales – Rock
Rivals (Railers #11) Now Available! »