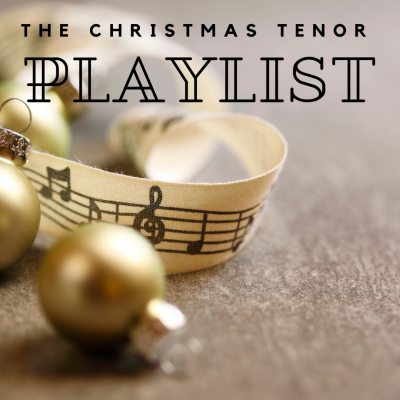 If you’re like me music plays a key role in my life. While I can’t listen to tunes while I’m writing I play certain songs when I’m away from the keyboard that keep me in sync with the characters that I’m writing. For The Christmas Tenor that included lots of opera with a tiny dash of Talking Heads.

Feel free to listen to this playlist now or sample it as you read along with Jules and Cab’s romance.

A trip that he thought would bring him only pain is about to present him with the greatest gift of all.

For three years now, Cabriolet Vermat has put off, wiggled out of, and outright lied to get out of making this dreaded trip east. The owner of Cabriolet Chauffeur Services in Los Angeles has avoided the yearly invitation to the small town of White Bridge, New York, to speak at their alumni winter gathering but this year they’ve outfoxed him. They’re throwing a dinner to honor his late partner’s dedication to his alma mater and have asked Cab to speak. This time he has to go no matter how much pain it will stir up. Arriving in the picturesque small town beside one of the Finger Lakes, Cab is treated to a special performance of holiday songs and there he sees Julian Gabriel Baez for the first time.

The young singer captivates him immediately, and he finds himself seeking out the much younger man after the performance. The pull he feels toward Jules is unlike anything he’s felt since he met his partner years ago. Confusion and desire war within him, but the outgoing young tenor wins him over with his engaging smile and kind heart. A two-day trip soon turns into an extended holiday vacation. Cab worries that the magic of Christmas will quickly fizzle out and he’ll be alone once more. Or will this festive season bestow a blessing of the heart upon a man who thought he would never love again?

The Christmas Tenor is a standalone small-town gay Christmas romance with a beautiful May-December relationship, a lonely widower, a rising opera star, loving families, and plenty of holiday joy.