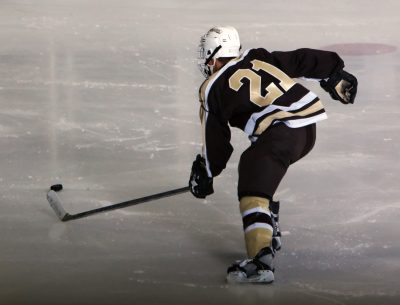 When we returned to the ice for the third period the score was tied at zero for each team.

The defensive players had found their strides. I had faced only eleven shots on goal during forty minutes of play. Heikko, Derrick, and the others were going above and beyond not just in intimidation and physicality – the sin bins had been busy all night – but also with giving up their bodies to block shots. Heikko had taken a bellringer from Boyan right to the side of his left foot that dropped the mighty Finn like a felled tree. He was out for perhaps five minutes then returned to the bench and threw himself in front of another shot with no thought for his body. That one bounced off his midsection, which winded him but only momentarily. When the boy promised to keep me safe he lived that promise. I would stop by his room tonight to check on him before bed and perhaps take him a bag of those spicy blue cheese corn chips that he loved so much. It was a small compensation for what I had to assume was a hairline fracture to his foot as well as a dozen bruises elsewhere. All to keep me safe.

Four minutes into the third period Boyan finally broke through the Ravens defense. With the puck on his stick, he charged down the ice like a raging bison, glowing red eyes and steam billowing from his nostrils. Not really. His eyes were cold gray and locked on me.